For those of you looking for a multi-pump pneumatic the Benjamin 397 Air Rifle is one of several options. The rifle features a hardwood Monte Carlo stock that is really pleasing to look at.

As an added bonus the stock is rather lightweight. The entire gun weighs in at about 5 ½ pounds, which makes it a decent choice for beginners as it’s not too heavy for them to shoot.

More experienced shooters also find that it is fun to shoot because it isn’t too light either. The .177 caliber air rifle is perfect for shooting paper targets, spinners, and is also great for plinking.

The Benjamin 397 Air Rifle has been made for quite a long time, so its reputation is pretty solid. The best part about this air rifle is that even though it has been made for years they still take the time to put in the extra details that make the rifle worth owning.

One of the newest features to be added to this classic air rifle is the swelling in the forearm. The manufacturer included this to make the rifle easier to pump.

Something else that the manufacturer suggests to ensure the gun lasts a long time is to put one pump into the gun before storing it as this helps maintain the seals.

When picking out a rifle you definitely want to choose one that is going to fire when you pull the trigger, plus it helps if it actually allows you to hit the target when fired.

The Benjamin 397 is a pretty reliable rifle, as people seem to hit the target quite frequently when they use the rifle correctly.

In terms of firing when you pull the trigger nobody has ever reported it not firing. In order to ensure that the rifle is going to fire properly each time most shooters like to know the trigger pull, it also helps them determine the risk of the rifle accidentally firing.

With the Benjamin 397 you are looking at a trigger pull of 5.5 pounds with a two stage non-adjustable trigger.

When it comes to purchasing an air rifle you want one that is going to hit the mark majority of the time. Let’s face it nobody wants a rifle that is going to shoot too wide. The single shot multi-pump pneumatic Benjamin 397 is not 100% accurate, but it more than gets the job done.

Keep in mind though that when you take the rifle out of the box you cannot expect the aim to be true, chances are you need to do some fine tuning to get the best results, so be prepared.

One thing that you need to be aware of before purchasing this air rifle is that it does not come with a scope, so that does affect the accuracy. However, the Benjamin 397 does come with front and rear sights to help you hit the target.

The front sights are blade and ram, while the rear sights are fully adjustable. Being adjustable means you can make adjustments for both elevation and wind, which really improves the accuracy of the rifle.

Even though the rifle does not come with a scope that doesn’t mean one cannot be added to it later. When buying a scope to attach to the air rifle keep in mind that the rifle has no dovetail or scope rail.

With some aftermarket scopes you are going to need to also purchase the Crosman 3/8 inch Intermount or even the Air Venturi Weaver/Picatinny Intermount. You can also purchase the B272 intermount to install a scope on the Benjamin 397. Adding a scope will improve accuracy, but it is not always needed.

When looking for the perfect air rifle you want to find one that is going to pack some kind of punch. However how powerful you want the air rifle to be will depend upon how experienced you are as a shooter.

The more powerful rifles, you know the ones with quite a bit of kick, are often best left to more experienced shooters, while the less powerful ones are a great choice for beginning shooters. 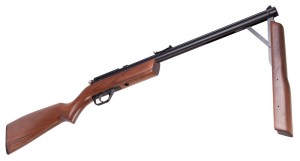 One of the best things about this single shot multi-pneumatic pump is you as the shooter control how powerful it is. If you are a more experienced shooter you can easily pump the gun up to its maximum and shoot away. If you are buying it for a beginner, they can simply pump it a couple of times to give it a bit less power, all without compromising the accuracy of the rifle.

For those of you that are pumping the air rifle up to its maximum, which is 8 pumps, you can easily send pellets flying to the target at 800 fps. This won’t take out large game, but it is powerful enough to use when hunting small game.

When it comes to looking at the value of the Benjamin 397 the first thing people tend to look at is the price. However, don’t fall into the trap of believing that price has everything to do with value. Sure it has some effect on the value of the air rifle, but you must also take into account the various features of the rifle to get a true idea of its value.

Now the Benjamin 397 is not the cheapest air rifle out there, but it is also not one of the most expensive ones either. The 397 is a mid-priced rifle that can be used by shooters ranging in experience.

The Benjamin 397 Air Rifle is a great gun for beginning and experienced shooters alike; everybody finds it to be a fun gun to shoot. Sure the air rifle has its flaws. It doesn’t come with a scope or mounting rails for a scope, but that can be added later. What it does come with is a fully adjustable rear sights and an amazing reputation.